Have a look at what we’ve been learning…

We were shocked on Wednesday morning as our chairs decided to quit! The class received a letter saying how the chairs were fed up of the children swinging on them, leaving them untucked and trumping on them! Fortunately, the class were able to write some excellent persuasive letters in order to persuade the chairs, which was lucky because apparently the tables were thinking about leaving next.

On Wednesday, Year 4 went down to Demesne Mill to carry out their geography fieldwork based on the water velocity of the River Wear. The children worked in small groups and dropped a ball into the river and timed how long it took to travel 10 metres. The children did this three times to make sure that the results were accurate. We did this test at two different locations to see how it changed further down the river.

This half term, for our DT project, we have been looking at torches. We planned to make them out of recycled goods. The children designed and then made their torches using items such as: yoghurt pots, kitchen rolls, cereal boxes and plastic bottles. The class also used what they have learnt in Science this half term, in our electricity topic, to make a complete circuit to fit inside their torches. 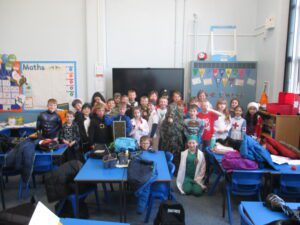 We all had a fabulous time on Comic Relief this year dressed as our superheroes.  We thoroughly enjoyed all the games that the School Council ran in the hall in the afternoon too!

We had great fun playing Nrich’s ‘First Connect Three’ game. The children played against each other and chose which order the numbers would go in their calculations before choosing which operation to use. All the answers that they could get made up the board and it was the first person to get three in a row. This was all part of our working backwards problem solving for this half term. As a class and in their pairs, the children discussed which tactics were best and tried them out in games against each other.

It has been lovely to celebrate World Book Day this year.  A huge thank you to all those costumes that have been made and the effort that the parents and children have gone to to create their outfits!

This half term, Year 4 have been doing dance as part of their PE.  Watch our final dance below!

Year 4 visited St. Mary’s and St Stephen’s Church to look at the stained glass windows as part of their RE work as they will be making their own based on Jesus’ life, before his crucifixion. Francine kindly showed us around the windows discussing what several of them showed.

This week, we investigated which material would be best for a rock band to soundproof their studio. The class covered cardboard boxes in: bubble wrap, corrugated cardboard, sugar paper, bin bags and rubber. The class found bubble wrap to be the best material for soundproofing.

then tested to make sure they worked. The children then discussed how the sound travels from cup to cup with regards to the vibrations and sound particles.

In English, we have been looking at narrative poetry.  To help inspire us to write our own, we looked at the poems that the Sorting Hat reads out in the Harry Potter books.  We then went on to read our poetry out loud using the morfobooth app.  Click here to watch our videos.

We practised our multiplication and addition using the new playground markings this week. The class played darts where they had to double and triple certain numbers depending where their beanbags landed before working out their total score. On the larger rings, children multiplied their score based on the difficulty (how far back they were) they had chosen.

We started our new science topic which is sound. The children tested instruments to see how the different sounds were made and where the vibrations came from.

Year 3 and 4 has their Christmas party this week. The children enjoyed a variety of games. Particularly pass the parcel with dares where the children had to floss, bark like dogs, hum the Strictly come Dancing theme tune and even dance off against Mrs Meek!

We completed our cushions this week. The class worked together to stitch their tie-dye cushions together using a back, running and over stitch. The children are very excited to take them home!

After planning and testing patterns and colours, we began tie-dyeing our cushions. We chose our pattern before using elastic bands to scrunch up our cushion covers and hold them in place. The class then added different colours and are now waiting for them to dry.

Over the last two weeks, we have been studying battle cries. How do we motivate our troops before a huge battle? How did Boudicca rally the Celts against the Romans? How does Santa get his elves up for making present every year? Well as you will see here we have produced some battle cries that Boudicca and Santa could use. The children wrote the battle cries themselves in class before performing them in front of the green screen. A big thank you to Zack B and Francesca for filming the Year 4 actors.  Watch our videos here.

In Anti Bullying Week, the police came to visit our class to discuss bullying. They spoke to us about what bullying is, how we can stop bullying, what we can do if we are being bullied or see bullying in school and why people bully others. The police officers also spoke about their own experiences of bullying before answering the class’ questions.

Does gas weigh anything?

In Science, we carried out an experiment ‘Does gas weigh anything?’ The children weighed the drinks first before releasing the gas and shaking the fizzy drink so that it turned flat.

We visited the Roman Army Museum and Vindolanda the Roman auxilery this week. The children enjoyed the hologram of the Roman teacher before roaming the museum finding out facts and answering various questions. The class were then able to watch a 3D short film about life on Hadrian’s Wall and Vindolanda. After lunch, we explored Vindolanda where we were able to see the old bath houses, butchers, tavern and the ‘Principia’ the central building where the Strong Room was that held the soldier pay. The class thoroughly enjoyed their visit and thank you to the staff at both venues!

We learnt about the Roman Army today. Unfortunately, we did not have armour or shields available so had to use alternatives. Firstly, we dressed our Roman in their battle gear, which would weigh up to 45kgs.

Next, the class took to the battlefield forming the famous ‘tortoise’ to protect them against arrows and oncoming attackers.

In the battle, the army was split and an officer needed protecting so these brave soldiers formed ‘The Orb’ to protect him.

Year 4 have been busy in English creating their very own wildlife documentaries.  Click here to see the videos.

Year 3 and 4 went on their Autumn Walk on Tuesday. They travelled up through Demesne Mill towards Jack Walker bridge. Here they manged to accidentally herd some sheep. Next, they paid a visit to the stepping stones before ending the walk at Holyrood Lane for some conker picking.

We completed our African animal sculptures by painting them using acrylic paint. There were elephants, lions, tigers, giraffes, zebras and even hippos. The children produced excellent sculptures that they can be very proud of.

We concluded our tooth decay experiment. We found that energy drinks, orange juice and coca-cola decay our teeth and milk and water had no affect on our teeth. The class then brushed the ‘teeth’ which removed some of the teeth’s enamel. The children practised brushing their teeth on our larger set of teeth before having a competition where they pretended to brush their teeth to see who brushed them for the correct amount of time.

This year, Year 4 are learning to play the recorder with Mrs Unwin. So far, they have been practicing playing the A and B notes. The class have enjoyed playing the musical games in class.

We began our experiment looking into how different types of drinks can affect our teeth and cause tooth decay. The class used eggs rather than teeth and placed them in water, milk, orange juice, Coca-Cola and an energy drink. We will observe the ‘teeth’ over the next week.

We began making armatures for our clay sculptures of African animals. The children drew a design first so that they could get the correct measurements for their armature, before constructing it with wire. The children then added tin foil to add some shape to the skeletons of their sculptures.

In our Animals including Humans Science topic, we made a mouth full of teeth using Play-Doh. The children made the incisors, canines, premolars, molars and wisdom teeth before placing them in the correct position on their carefully constructed gums. The children labelled and wrote down each different function of the teeth.