Have a look at what we’ve been learning…

Year 2 have celebrated the Queen’s Jubilee by creating artwork, decorating biscuits, making crowns and creating shape poems.  We can’t wait for the Jubilee Party on Thursday!

Year 2 have worked so hard this week carrying out all the ‘special work’ that they have to do at this time of year that they ended the week having fun. They chose to go out onto the climbing frame and play games with the large parachute. Everyone played lovely together and had a great time.

In Art, as part of their work on collage, Year 2 have been practising their cutting skills as well as different techniques to create paper sculpture. They had a go at fringing, twisting, spiraling, feathering and curling. They will use their new skills in future weeks to enhance their collages.

Year 2 have been very busy out in the wildlife garden this week. As part of our exciting new Science project ‘Connecting Schools to Nature’, the class have worked hard clearing the different areas ready for its upcoming transformation. They started by carrying out a litter pick and noticed that most litter was plastic which can take years to biodegrade. They cleared the footpaths of weeds and rubble and cut back some of the overgrown trees and bushes. A lot of weeding was done and they created a lovely seating area, a log pile house, a rockery and a mini-beast haven using lots of heavy logs. George did a great job helping to move all the logs! They then set to work tidying up the bug hotels and getting the camera trap and footprint tunnels in place. Keep an eye on our school’s Eco Page to see photographs from the camera trap and some of the prints off animals that we find from the tunnels!

On Thursday, they had an online meeting with Sarah, our link scientist from the BES (British Ecological Society), who gave them advice on what we need to do next to make our garden more accessible for children and a wonderful place for living creatures to explore and create their habitats.

Year 2 spent the afternoon with author Adam Bushnell to work on their story writing. The focus was ‘Crazy Creatures’ and so they spent the afternoon designing their own crazy creature before exploring all the different vocabulary they could use to describe it. The children were encouraged to write expanded noun phrases about their creature. Then they went out into the playground to develop their story plan before sharing their ideas with each other in preparation for writing their own fantastic story. Adam also brought in his pet tortoise Jet to meet them all!

We all had a fabulous time on Comic Relief this year dressed as our superheroes.  We thoroughly enjoyed all the games that the School Council ran in the hall in the afternoon too!

The Great Fire of London

To complete their work based on the Great Fire of London, Year 2 put all their knowledge to good use at the end of the last half term. They made cardboard houses from scrap materials to resemble houses from Tudor times. The strong winds that we have been having put a stop to us trying to recreate the fire and then finally this week we were able to go out onto the field with Mr Anderson and his class to recreate the fire in Pudding Lane in 1666.

Making sure we stayed safe, we used a fire circle which only Mrs Wilkinson and Mr Anderson were allowed to enter. After starting the fire in Olivia’s replica of the bakery, they watched how it easily spread from building to building.

The fire spread quickly because the buildings were so close together – said Roman.

The summer had been hot and so everything was very dry so burnt easily – said Lily-Rose.

Samuel Pepys told King Charles to blow up some of the houses to help stop the fire – said William W.

It has been lovely to celebrate World Book Day this year.  A huge thank you to all those costumes that have been made and the effort that the parents and children have gone to to create their outfits!

As part of our school’s launch of Educate and Celebrate, Year 2 discussed how we are the same and different. The list for being different was very long and our discussion led us on to how everything about us is different, including the families that we live with.

We watched the story of Same but Different Too and read What Wesley Wore to discuss how it is important to be who you want to be and not be worried about what others say.

fferent properties of materials. Each investigation gave the children the opportunity to work collaboratively in a team to solve STEM (Science, Technology, Engineering & Mathematics) problems.

First they looked at why some balls were bouncier than others and discovered that the floor causes a lot of friction when balls bounce.  They then explored how strong materials were by testing the best material for a hamster’s cage; thinking about how hamsters use their teeth to gnaw, and they worked as a team to build a bridge from cardboard that would hold the most weight. Finally we looked at the strength of paper and explored how to manipulate it to make it strong so that we could build the tallest free-standing tower.

This week, Year 2 have had a busy week in Maths being ‘Data Detectives’. They started the week with an important letter from the chocolate company Nestle who asked they to investigate the colours of Smarties in their tubes – they did a brilliant job and were able to collate lots of facts to send to the company. Then they went for a walk to collect some data based on the types of vehicles that passed through the town. Back in the classroom, they were able to create pictograms and bar charts based on their findings.

As part of their work on Christianity in Year 2, the children learned all about Christingle celebrations. Christingle is a joyful celebration that brings families and communities together to share the light of Jesus and spread a message of hope. They then made their own Christingle using an orange, a candle, red ribbon, cocktail sticks and dried fruit – each item symbolising an important part of Christianity.

Year 2 have been looking at wind power in their DT lessons this half term.  They started by researching all the things that need the power of wind to operate and then moved on to looking at windmills.  After finding out about how windmills work they then made their own pinwheels, which they tried out in the wind outside.  They discovered a few little problems with their designs and so have come up with some excellent ideas on how to improve their designs in their next lesson. 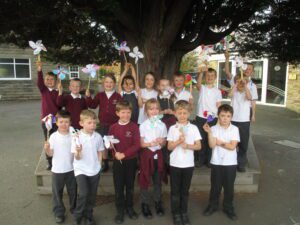 Year 2 had a very important job to do this week.  The art supplies company Crayola asked our class if they could investigate the different types of chalk that they have.  The children were given a piece of chalk that is currently manufactured and then a piece of their new ‘anti-dust’ chalk.  They went out onto the playground to test the different pieces and write down their thoughts. They did a brilliant job recognising the difference in the strength and feel of the chalks as they created some wonderful artwork. Their results were then sent off to the company and in return school received a lovely art bundle of Crayola goodies.

Key Stage 1 made the most of the last day of term on Thursday by having lots of spooky fun.  All dressed up in their best costumes they spent the morning doing spooky quizzes, making bat biscuits and solving Halloween puzzles. Then on the afternoon it was great to be able to party the afternoon away playing all their favourite party games and having a good dance.

It was nice to be able to get back outside for our annual autumn walk this week. Before we set off, we talked about the signs of autumn that we expected to see and we thought about what natural things we could collect to create some artwork. We were lucky to have a dry day and spent the morning slipping in mud, stepping over stepping stones and splashing in puddles.  We saw lots of signs of autumn along the way and collected a range of leaves, twig, berries and lots of conkers! Once back in school, we then looked at the work of artist Andy Goldsworthy and used his artwork as inspiration for our own.

This half term, we have been learning all about the five oceans and seven continents of the world.  We can now name them and identify where they are on a map of the world. This week, we became geographical researchers when we had to work with a friend to find out facts about one of the continents.  We used a range of sources of information to find out as much as we could about our chosen area.

Here are some of the fun facts that we found:

“There are 48 countries in Asia” by Alexandra and William

“No one lives or has ever lived in Antarctica” by Roman

To help us remember the names of the continents we have been using this song.

Our English work has focused on writing non-chronological reports and we chose to write about bees. We did a lot of research into bees and then had a visit from Dot from Weardale Bees.  We shared our knowledge with her and then she explained to us how honeybees are kept and we got the chance to look at all the different types of equipment that she uses.  We then had even more information to add to our report writing.

Year 2 had a fabulous time at the Weardale Adventure Centre on Friday.  They started the day by carrying out an orienteering activity where they had to find all the hidden animals around a field.  They then tried out their strength and balance skills by completing the low rope course which ended with a zip wire, where some of the class overcame their fears and gave it a go!  Their den building skills were then put to the test and three amazing dens were built.  After lunch, they carried out a scavenger hunt for items to create a piece of artwork and then played some games.  They ended the day sitting around the camp fire eating marshmallows and drinking hot chocolate – perfect!

What a great start to Year 2

Our new Year 2 children have made a great start to the year. They have been showing off their fabulous Maths skills and been working hard learning the names of all the continents of the world as well as a whole range of other things.  Keep up the hard work Year 2 the future is bright!